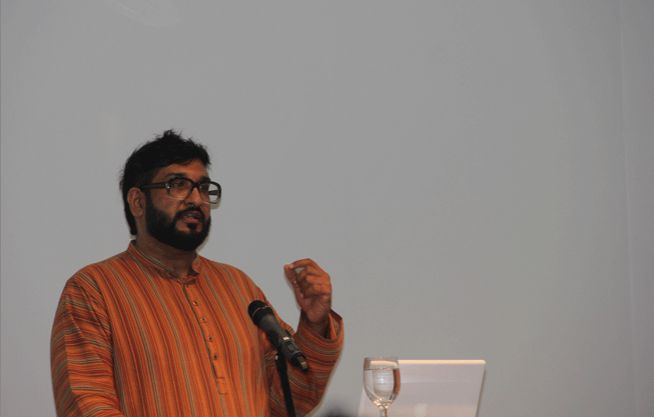 Murtaza Vali moderated another of the central panels during this March Meeting; Artists and Audiences. One which spoke from the UK, the USA/Dubai, Palestine, Taiwan and Qatar to an audience far more diverse in its locations. Vali spoke of a radical “rethinking of the artwork as a situation that requires an audience to complete it”, something which new media has helped generate as well as being some of its sites. As he said, this raises many issues but “the really big one [is] what is it exactly that we mean by the word audience?” If audience activates the artwork then how does the artist/artwork/institution ‘activate’ the audience? How is theory made new practice?

It’s a tough question which the panel bounced around but didn’t ‘dunk’. Louise Hui-Juan Hsu from the Museum of Contemporary Art Taipei, Taiwan, for example, reminded us that the “translator in this case, is beyond the translation of words”. Abed al Ju’beh, who runs the Khalil Sakakini Cultural Centre in Ramallah, Palestine, spoke of the singularity of his literally captive audience. I’d not seen him since the leaving party at his home in the South-east of England 5-6 years ago when he took up this post. Ramallah is at the heart of a giant open air prison where, he said, the audience comes looking for confirmation of their existence. It’s an audience which the Sakakini reaches out to with a residency programme strictly for local artists.

Michelle Dezember from Mathaf, the Arab Museum of Modern Art in Qatar, spoke of “encouraging artists to think of the context” and “to remember that the artist is also a learner.” Amal Khalaf spoke of the Edgeware Road Project which was tasked with taking its shisha-rich neighbourhood as a starting point. After three years of forcing engagements in the street and neighbourhood they are showing the fruits of that collaborative work for the first time in London. Khalaf used a nice phrase when describing projects like the ‘megaphone interviews’, in order to distinguish this work to formal research. She spoke of an aim to produce “contentious knowledges each day” -a good actualising of Salah Hassan’s “particular sums of the local.”

Listening to the creative curators panel yesterday I’d written a note to pursue; “what exactly is the difference between this ‘new’ institutional ethos and say, the DIA? Qualitative distinctions as opposed to quantitive ones?” An answer begins with cognition that the world is undergoing significant scales of change, which is why the question arises in Sharjah etcetera and why answers for us all will come from this and related locations. Obrist then credited the DIA as a forerunner and suggested a mapping project for past models of positive examples. Today, Khalaf additionally credited the Townhouse and Ashkal Alwan as inspiring models for the orientation of “existing practices” towards the context -and/or literally the neighbourhood- of an institution.

Murtaza Vali summed up with the most important question of all. Once this engagement been made and results drawn back in to the institutional/cultural space, in what way do these new audiences actually participate in contributing to the institution/culture and what it shows or shares? There is an obvious danger that this art practice becomes a form of anthropology -in which perceived periphery serves perceived centre- unless this question is fully engaed. This is the case at the single, local level of one institution but also a metaphor for the relationship between the March Meeting and the drawing down of experience, other/Occidental models, into a process of poitical and creative reconfigurement .

This is something that Bombay-based collective CAMP, contributors to the Edgware Road Project and ongoingly at Sharjah, address in their work and specifically their approach to a residency at the Edgware Road Project. That approach speaks of a “throwing forth” of unclassifiable research materials of this kind, versus a “keeping safe”. A radically new economy of relays, passes, borrowings across projects, neighbourhoods, institutions and other locations. Of printing these scraps from the web; “not a mechanical but a creative act”, vice versa and round again with natural promiscuity. I think this addresses Salah Hassan’s profound challenge in another ‘great beginning’. It’s a humbly/richly generative way forwards, a form of what I’ve called previously ‘dirty Utopianism’…