I always opposed separating-out things in this way! My words find their form, time, place and that has included words on art gallery walls, curation of works around my texts, curating artist-videos -including my own- seeded by my texts, as well as a more involving collaboration on a film-based installation, etc. Incidentally, the first film I ever made was based on Antonin Artaud’s Artaud Le Momo, using his words visually and aurally. A new project called Porting was set to begin with a word-based visual/performative work early in 2017, but Abu Dhabi intervened to thwart it for a while. Let’s see where my assembling of Porting One (DXB) takes me in 2018?

Contributions by visual artists, writers & philosophers took this & other forms each day.

Supercommunity for La Biennale 2015 -links to the whole project, since published as a book by Verso Books, Nov. 2017. 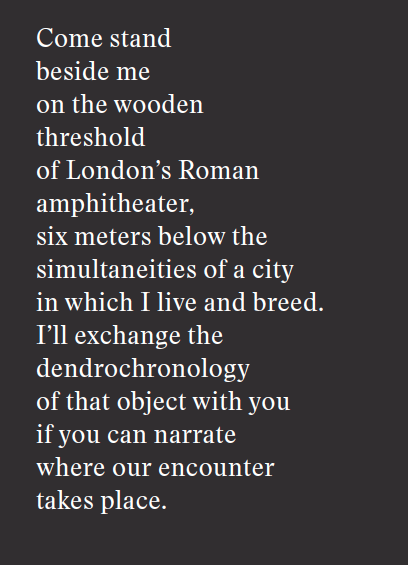 Numbers 4, 9 and 10 of Inter/Intra. This series of e.thing texts were commissioned for End Note(s), a publication that “extended” the Moderation(s) project produced by Witte de With and Spring Workshop. They respond to and develop on thematics of the very various forms that the project took. The other contributors to this book were; A Constructed World, Nadim Abbas, Defne Ayas, Oscar van den Boogaard, Mimi Brown, Heman Chong, Chris Fitzpatrick, Amira Gad, Travis Jeppesen, Latitudes, Christina Li, Guy Mannes-Abbott, Samuel Saelemakers, and Aaron Schuster.

End Note(s) is a fine looking and reading thing, vibrant in green, one of the colour options instead of black above. I didn’t insist on my favoured font and perhaps should have done, but did want the text to be as large and ‘loud’ as possible (these are full page images) because of the subtleties they entrain… That is, what they are saying is the opposite of assertion, right?!

You can get a copy of these and the book from WdW’s site here, Cornerhouse, UK, Ideabooks, Amsterdam, Artbook, New York.

Derived from presentations given at the Institute of Arab and Islamic Studies, Exeter, UK, and the Academy of Fine Art, Oslo, Norway, during Fall 2013. (Thanks K.)

“In his famous text ‘Beyond Human Rights’ (1993), Giorgio Agamben described the 20th century refugee as the paradigmatic “figure for the people of our time”. I would suggest that the migrant worker is the 21st century equivalent of this configuration of the refugee. “Only in a world in which … the citizen has been able to recognize the refugee that he or she is … is the political survival of humankind today thinkable.” 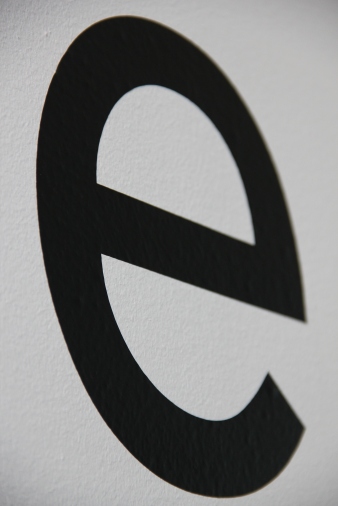 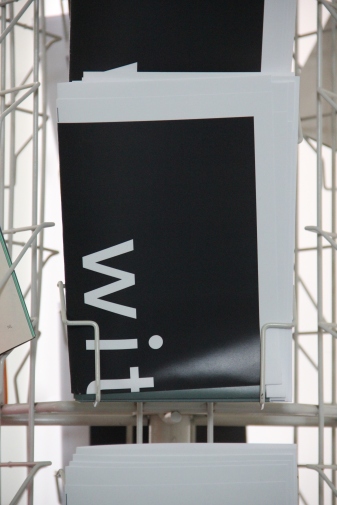 ‘In witness times begins’ was my contribution to a weekend of performance at Witte de With A Thing at a Time -part of Moderation(s)- over the 19th/20th April 2013, also involving Mette Edvardsen RoseLee Goldberg Anthony Marcellini Eszter Salamon Benjamin Seror and Koki Tanaka. The commission was for a wall-text piece for a new bar in this space leading to the main theatre/lecture hall through the grey door. I focused on performance as such, intervening in taken-for-granted notions of it; time, authenticity, witness, sweet Cagean nothings. I produced four text pieces; Per 1-4, as a pamphlet publication in the rack there and downloadable below, e.thing essays at witness referencing Paule Thevenin’s witness of Antonin Artaud, Hannah Arendt’s witness of Eichmann, mine and Bhupen Khakhar’s witness of state sponsored killings in Baroda 2002 (this text uses no proper nouns, however). Each leads towards this reconceptualising of time and when it is, takes places, begins… again.

My warm thanks to Defne, Heman and Samuel.

CAMP were commissioned to contribute to FT2011 and worked with volunteer coast watchers over several months, enabling them to capture hundreds of clips of their view/s. I was invited to join in the developing of these visual and oral clips/anecdotes into a 60 minute long film/installation which also involved ‘watchers’ in making additional recordings. I work with words; structuring and clarifying, adding depth or dimension, developing dialogue and writing voice. Beyond a mention for my 35-page script lies the secret realm of a very special collaboration.

reviews
Adrian Searle in The Guardian; “It’s a case of the watchers watched, and we watch too, following near-collisions out at sea, and blokes hauling up lobster pots. “Lobsters are giant Jurassic insects,” someone says. I’d happily stay all day.”

Colin Perry in frieze; “In a look-out station high above the town, Mumbai-based artist group CAMP (Shaina Anand, Ashok Sukumaran and Iyesha Geeth Abbas) with Guy Mannes-Abbott, installed an engrossing 2011 video, The Country of the Blind, and Other Stories (it is named after the H.G. Wells novella of 1911). Centred on the daily activities of the National Coastwatch Institution, it offers a telescope’s eye view of the coast, with a running commentary by the station’s guardians. They opine about everything, from wind-buffeted pigeons to the ghostly appearance of the largest container ship in the world drifting like a shadow across the horizon. Tangentially humorous and politically astute, it was a joy to watch.”

salon 3 [Hans Ulrich Obrist, Maria Lind, Rebecca Gordon Nesbit] invited me to come up with an appropriately scaled project for their modest-space-with-big-ambitions inside the Elephant & Castle shopping centre. I’d already prepared to use the ten texts of walking 1-10, a sub-series of e.things, to make a series of films called Head in the Clouds at RP in 2000. Instead, I used them to ‘seed’ this programme of artist’s videos.

The walking (in place and space) involved my actual nocturnal habit of looping between home on Balfour Street and Waterloo Bridge, which detoured around the E&C at that time. So it was peculiarly fitting that the original week-long screening of the programme was at salon 3’s space. Celine Condorelli collaborated in the making of a tenth contribution to w1-10 [screen-grabs below minus my voice over] and with that first realisation.

The programme was curated on the basis that the artist’s work had varying peculiar relationships with film-making -including none. This was important because I wanted them to respond to the rhythms and ‘lightness’ of my words rather than ‘film’ the texts. The curating of artists was precise and their brief was to make anything they wanted from a single word to any or all of them or their potentialities.

Fiona Banner had by then, for example, painted her worded responses to movies, notably Apocalypse Now in The Nam. Characteristically, she took up the challenge to make her first ever film/s for walking 1-10. Similarly, I knew Jeremy Deller was assembling VHS footage of anti-globalisation protests and preparing a project that became the Orgreave film with Artangel. I remember him asking if he could “have the political one” [walking nine] to work with, before cutting his first film too.

Cerith Wyn Evans had long since stopped working with Derek Jarman and making his own acclaimed Super 8 films to reconfigure his practice around sculptural installation. This singular combination was reflected in his reshooting a segment of Brion Gysin’s film containing the magical line “I’m in a 1950s movie” -which had often provoked early morning hilarity amongst us. I’d seen Mark Aerial Waller’s films; shot in infrared, featuring the late Mark E. Smith, and very much indoors. For w1-10 he concocted a drama from my texts and shot it in infrared ‘without’ doors…

w1-10 was next screened at the old Lux in Hoxton Square, along with my reading followed by Cerith and I in conversation. An edition of the programme was scheduled to launch on the very day that the old Lux went into receivership in October 2001. I was away in Gujarat then and through to July 2003 and the moment was never recovered. However, w1-10 can be hired from the Lux and these texts will be part of any forthcoming selection of e.things. Look out for news of that… 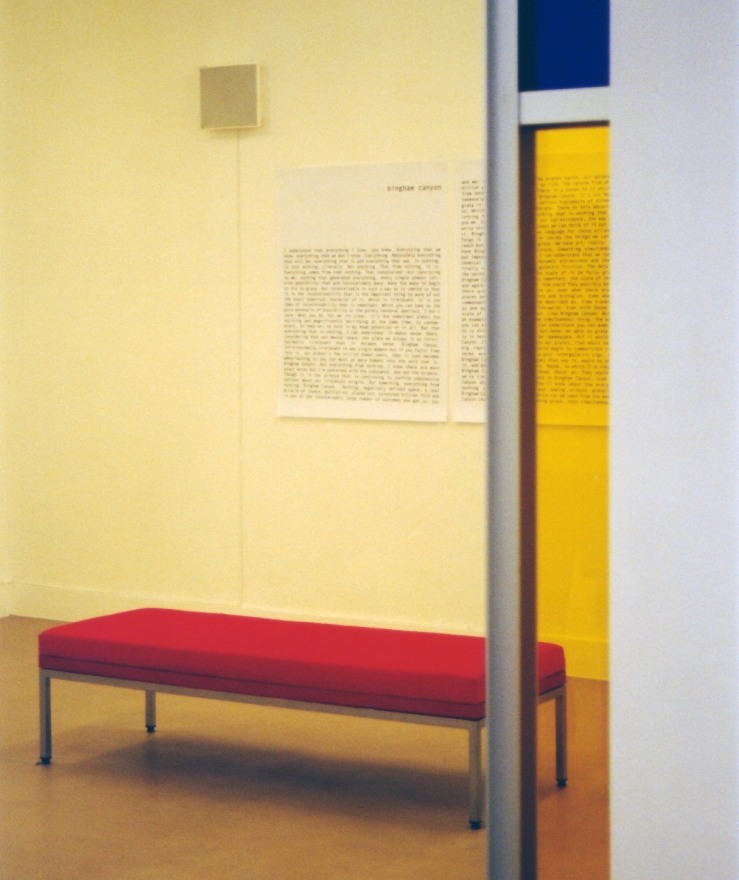 Essential Things celebrated the completion of the first one hundred e.thing texts, which had begun circling themselves; D, for ‘live dangerous’, had become d-plus -similar, but with consequences.

I wanted to accompany my texts with existing works of visual art that embodied the spirit of the e.things as a whole. For the most part, these were works that had resonated with me over several years and possessed an independent presence amongst the texts. Together the artworks ‘stood’ as a show without my texts, but the texts articulated continuities and forged together works like Simon Periton’s Anarchy doily, Sarah Lucas’s, for once literally ballsy, Lion Hearts, with Cerith Wyn Evan’s Lacanian ‘loop’, for example.

I’d always remembered a sound piece of Angela Bulloch’s, for example, from a show called ‘Broken English’ at London’s Serpentine Gallery, in 1991. That piece was called ‘Crowd Sound Piece’ and involved three separate chairs; yes, no and maybe. Angela made a new bench piece for ‘essential things’, in which she used the old sound track to argue with herself and called it ‘Basically the answer is yes’.

None of the art corresponds to any particular one of the texts but it all shares a very specific location with them for me: the domain of the e.things. None of the works is simply or merely what it appears to be -least of all Gary Hume’s Happy ‘sign’ -gloss paint on aluminium- which communicated so intimately with a near-guarantor of tears; richard one- and yet everything in the show was dangerously alive.

The show was accompanied by the publication of a CD-ROM of the same texts; then still exotic but soon a banal format. Incidentally, the format of my texts was specific to a book of these 100 texts that the gallery did not deliver before closing in 2000. 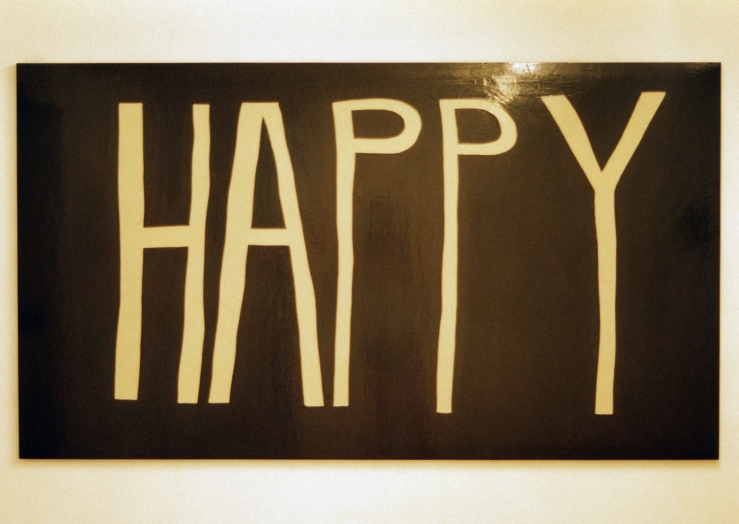 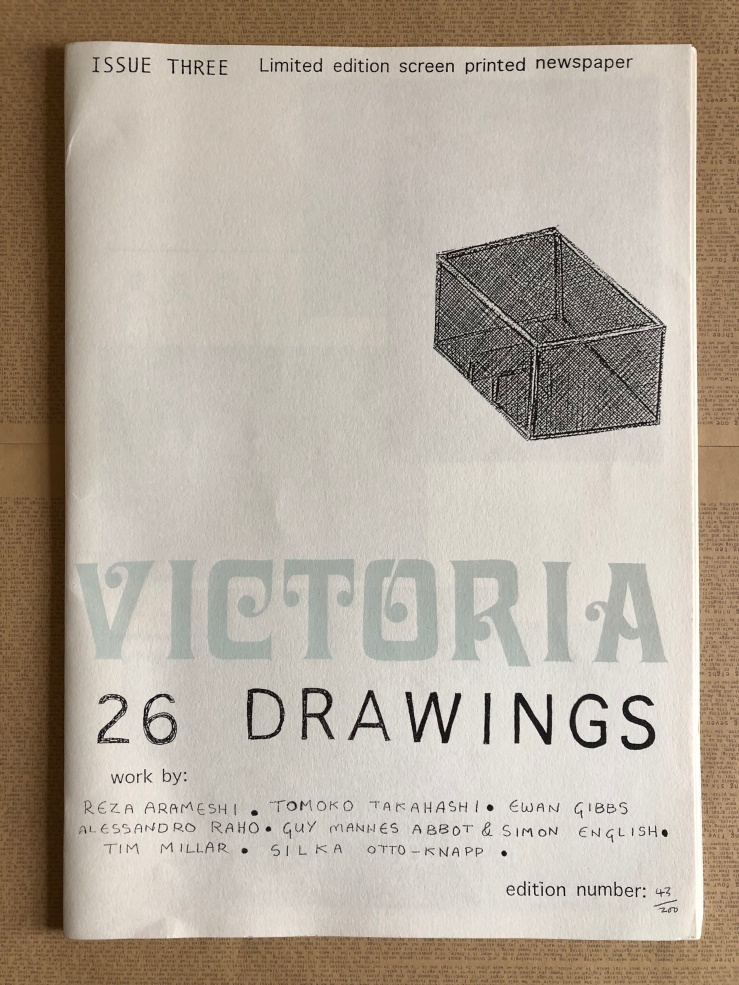 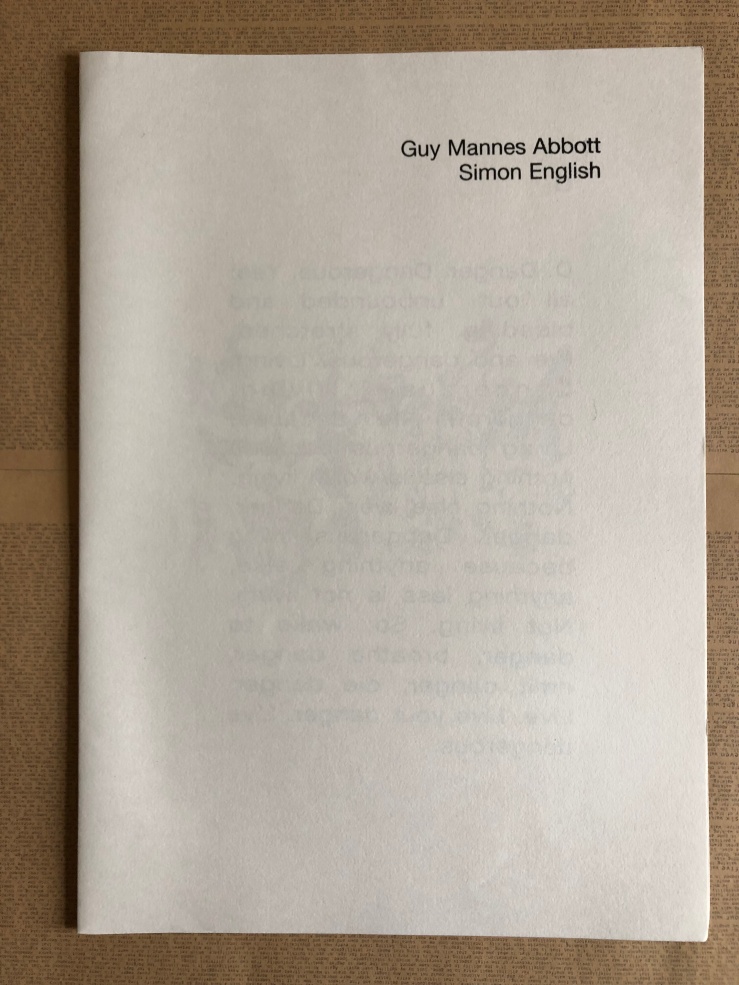 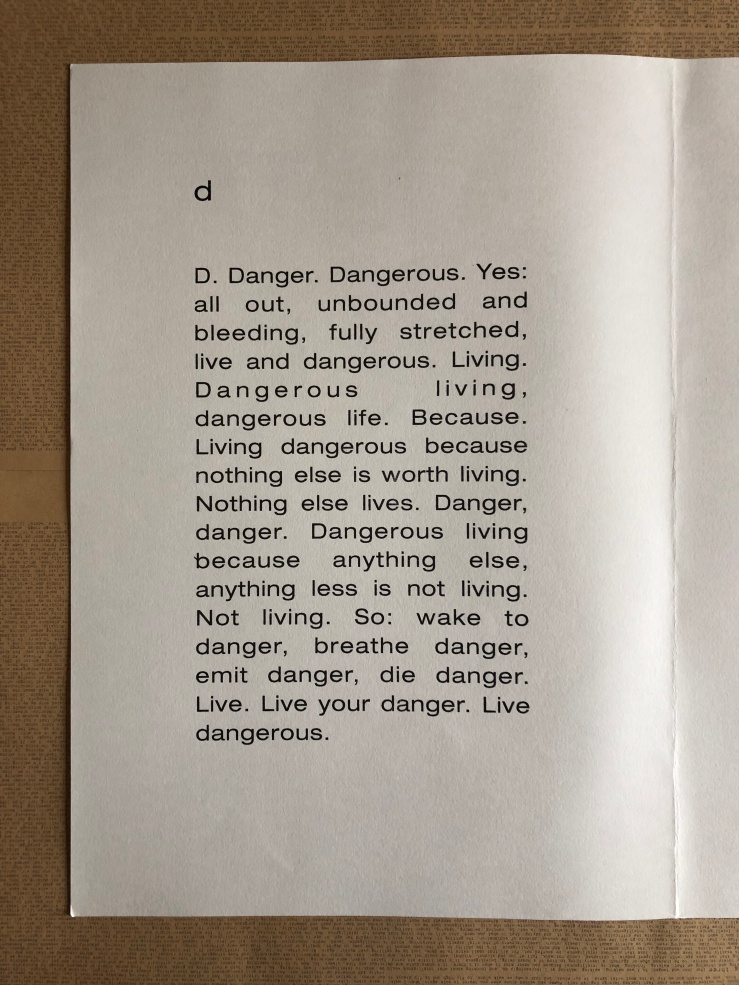 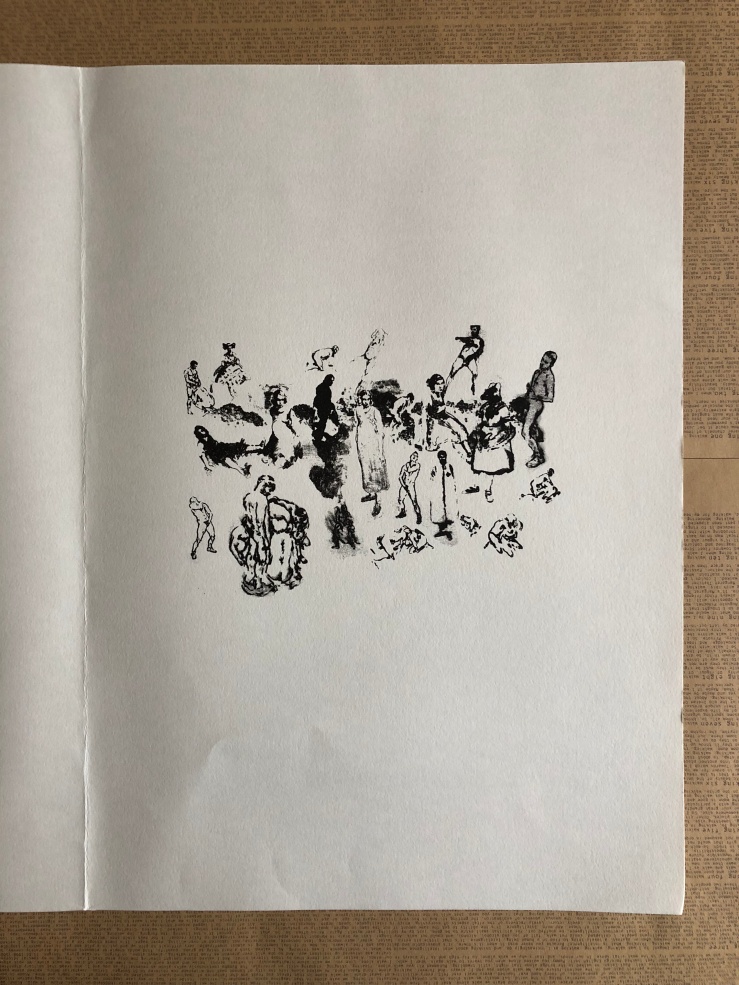 . WE GOTTA GET OUTTA THIS PLACE Curated by Stefan Kalmar at Cubitt, London, November 1997.

I’d only just begun writing e.things [short for ‘a thousand essential things’] when asked to contribute to this show. I didn’t know what they were yet but Stefan was persistent, had a good line-up and offered a 10 metre-long wall to share, loosely, with Richard Wentworth [selections from his photographic series; Making Do and Getting Better]. Instead of blowing up my text -e.thing- predictably large, I ran it the length of the wall using 2 cm high letters and then started again back again at the beginning, doubling the line. A small act of resistance to notions of ‘accessibility’ in art and writing; my already dense text rendered more demanding of concentration… I also gave the first ever reading of e.things during the show, which generated such a generous volume of appreciation throughout that people came down four or even five storeys of the building to discover what had happened or was going on. First time, best time…