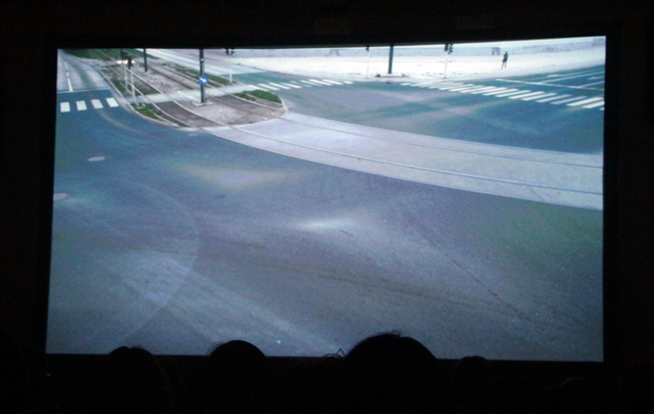 Ziad Antar fizzed on stage, to the audience’s amusement, relaying a similar tale of struggling to “create a point of view” in the churn; “when you live nowhere” there is a price to pay. Sejla Kameric introduced a note of caution by asking “is it a life we choose or is it by necessity… there’s a fine balance between a need and a choice.” She said she had also moved a lot on what can appear to be a circuit, but increasingly found she needed a strong working base at home in Sarajevo. [I’ll return to the screening of her version of the 1395 Days Without Red film in Bait al Shamsi later in the evening when I post a substantial interview soon; see Appendix 1 Sejla Kameric & I Go East [to Kalba].

Nikolaj Bendix Skyum Larsen spoke about a lengthy relationship with Sharjah since 2003, and of being the first artist in Residence here in 2004. He stayed in the corner of Bait al Shamsi for 7 months then, which led to his film about Gulf workers who come from Kerela in India. He filmed individuals in Sharjah, then travelled to Kerela to listen to and film their families and installed the results, Rendez Vous [which I’ve not yet seen], as a mediated conversation. His appreciation of SAF’s deep support was touching as was his sharing of various technical skills with the community he worked with and resided in.

Didem Ozbek spoke of PiST, the residency programme in Istanbul that she runs with a partner, both of whom are artists who still do residencies themselves. Images of an artist dinner outside in the narrow street said more than many words would have done about being situated in a context or community. Her interlocutor in this instance, Adeela Suleman [Vasl] described the work of her artist’s collective in Karachi, Sindh and the pragmatic difficulties faced by their own residency programme too. I was pleased to later stumble on some of her own work, exhibited at Art Dubai.

A conversation by Khalil Rabah and Rana Sadik about the relationship of artist and patron was one of the things I was looking forward to. It was interesting if only because they couldn’t/wouldn’t leave that relationship at the side of the stage but instead displayed how intensely intimate it can be, with highs no doubt, and evidently fierce lows. Rabah [one of the artists who contributed a response to my texts in the forthcoming book, In Ramallah, Running] asked in a final flourish; “how can a conversation in front of an audience be a performance?” With so ubiquitous a fascination with media abroad it was a privilege to witness something in the art world so entirely unmediated.

I’m afraid I made no notes about my own panel on Crossing Disciplines which -given the ways it crossed disciplines and was not reducible to a single mute voice- was ably moderated by Defne Ayas. I presented along with the notable Alanna Heiss, Negar Azimi and Omar Kholeif, each of us with an abruptly foreshortened time limit. My own paper was precisely about dwelling on the frontier, the generativeness of that state and long experience of working from there as a writer -albeit a writer whose words have been shown as art proper, generated an exhibition and programme of artist’s videos and now a book with a high caliber of collaborative contributors, not least two of those featured in James Lingwood’s talk about the work of Artangel; Jeremy Deller and Francis Alys.

Earlier, a questioner ridiculed the notion of artists being nomads. I think it would be more interesting to articulate where we dwell in actuality. Less residency more residence [an open question]. I made the point myself -via a story about frontier light and sound on an actual closed frontier between Sindh/Kachchh, Pakistan/India- that I’ve long resided there in a particular sense, but also that the art of now and here dwells on that same frontier -arguably all of us do. That is, ‘globality’ is finding itself on a frontier of this multiple, generative and so far unmappable kind. Ayas asked a question about how many histories are currently in the mix and how to work with them productively which went unanswered. This is a question from and for the frontier, one which we can only answer here, as we cross, recross and slip over the cusp.

Forgive me if I respond now by quoting my own presentation; “I step over the line to stake a claim for difficulty over ease, the obscure over the blindingly present, “dark” over “light” in Agamben’s sense, acts of making over systemic proposition, for words on the frontier.”

One thought on “notes from a meeting, artists on the frontier; resident or nomad? [day two pt2]”