Words also make up generative elements here; in the large, complex and beautiful installation by Amar Kanwar for example, and are properly at play in the work itself -in Slavs and Tatars brilliant ‘Friendship of Nations’.

I’d wandered through Kanwar’s piece during installation and, bemused by the work initially, indulged my fascination with the physicality of the installation itself; the shelves housing projectors, the screens hanging off a metal frame and the apparent absence of any link to books at various points through the large room. On a second visit, another exhibiting artist turned as a I approached with delight in her face having just been talked through it by Kanwar himself… and explained.

The piece begins in a story about a book seller called Ko Than Htay who would tear out the page that the Burmese regime ensures that every publication in the country has as a preface. It’s a point by point paean to the glory of the Junta, in essence, and KTH tore out every one of those damnable pages before passing them on. In 1994 he was charged with ‘tearing out the first page’ and “sentenced to 3 years imprisonment and torture in the infamous Mandalay prison.”

This is the way in to the piece, but critical thereafter is the fact that the screens on which a series of filmic interventions are projected are made of paper too. One of the screens shows film of the Burmese dictator of the day casting petals onto Gandhi’s memorial/Smitri in Delhi [something done repeatedly for cameras] as a guest of the Indian government which has it’s own politically repressive reasons to collude on border ‘security’/look the other way -and to exploit/abuse the memory of Gandhiji… 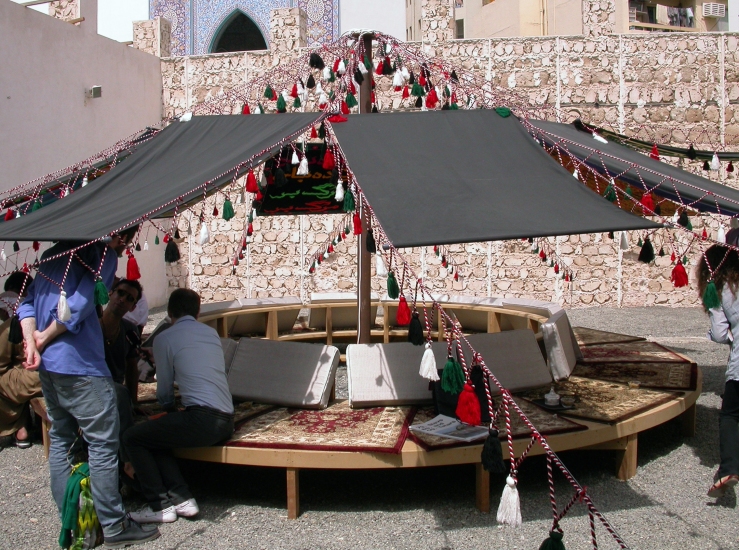 Out on the westerly frontiers of the Biennial, amongst a peculiarly rich collection of installations, is the one that Slavs and Tatars have installed in the open-to-sky courtyard as well as the small buildings which they’ve sophisticatedly redressed with very simple materials; ‘Friendship of Nations’.

In the courtyard is a be-tented chill-out zone, where tea and mulberries are served alongside another notably well-filled publication. As apparently cosy and even cynical as this appears, a characteristic witty opacity -of the radical passivity kind- reigns in images attached to the underside of the tent. I’m sat -perhaps appropriately- underneath one that reads BEWARE THE ANTI-IMPERIALIST IMPERIALIST. However I’m pretty sure that the two men with whom I exchanged elemental Arabic greetings with, are not perceiving the text or its warning as something legible -which might be worth a consideration?

This welcoming tent is actually difficult to climb out from under, but once free I entered the building, which is reclad in that green of Islamic symbolism everywhere, as well as of the recent abortive uprising in Iran. Inside is a beautifully woven ‘turban’ of wheat grass, a beaded shade over a neon bulb and a wall mirror that they’ve shown before, but which is suddenly green here -of course. In part, it’s a visual art reference to that great mirror-maker Monir Farmanfarmaian but it carries their most mischievously ambiguous ‘slogan’ here; RESIST RESISTING GOD.

The publication describes how the earlier version of this worked; “when viewed frontally it looked like another decorative mirror pattern… but from an angle, a text appeared somewhat mystically…” These angles and mystical, or mystifying texts, are the defining element in this wonderful piece, making excellent use of writing as text. That is, for all the playfull ambiguities present this is still a use of words within their semantic parameters, no?

For me, Slavs and Tatars ‘Friendship of Nations’ is the big surprise and delight of the Biennial so far; both startlingly good as well as effective as art. It’s still early days, but I will assert that you’ve won’t have seen the Biennial if you don’t find your way to and through the Baits to this particular installation…