Rage Against the Machine’s “Killing…” made sense, mainly because it was such a great track back in the mid-90s, right? Cage Against the Machine, the attempt to block/buy the No. 1 slot for a recording of John Cage’s 4’33” -a rigorously orchestrated slice of atmospheric sound, often described as silence- was always a bit too clever and so a bit too dumb to work, no?

Kenneth Silverman’s recent biography of Cage, Begin Again, is a pretty straight celebratory record of an entirely remarkable life [and not published in the UK!]. Cage spans [subverts?] or strides [meanders?] the 20th Century in very particular ways, making work from beginning to end nearly and constantly mining the same seam of inventive attempts.

Always beginning again, afresh, anew -so the thesis runs. KS makes an epigram of Gertrude Stein’s gorgeous line from The Making of Americans; “Beginning was all of living with him, in a beginning he was always as big in his feeling as all the world around him.” The way in which this actualises is exemplary even while it creates doubt in me too -as the book goes on dutifully detailing yet another I Ching derived whatever! 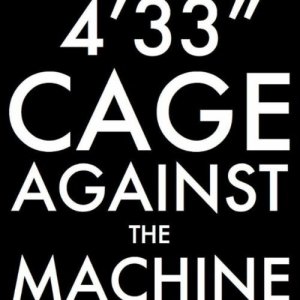 4’33” was achieved using a deck of tarot cards, which even Cage said “seems idiotic” but he composed each movement by joining up randomised periods of silence with precise measures which totalled four minutes and thirty three seconds. The point, one made more precise by his subsequent visit of Ryoanji and fuller acquaintance with Zen, was that the ‘silence’ is a pregnant one, like the stone garden’s potent ‘blankness’.

Two thoughts; one links directly to the gorgeous version of Feist’s song, There’s a Limit to Your Love, that James Blake put out a month ago. As you know, the track is a departure from his flurry of promising EPs released this year alone, including CMYK and Klavierwerke, for foregrounding his voice against a piano track redolent of Nina Simone and an electronic bassquake. Apart from just enjoying it and its arguably rather more local newness I was struck by the ‘silence’ it contains. Or near silence, in a world of encompoptainment, near silence is startling. So for one thing, the righteously Cowell-obsessed might have got behind Blake’s track in a similar spirit but freed of gimmickry and at least pointing forwards.

Blake has his first regular album-length CD out in early February. It includes Limit which is already propelling him to places/spaces that you can only hope he keeps passing through [perhaps in the way that the much older Antony [Hegarty] -who comes to mind during album tracks like Why Don’t You Call Me- seems to have]. The album is one of entirely  vocal tracks; songs! -some of which are wonderful-intriguing [Wilhelms Scream] and some bear marks of the journeys he’s taken so far, with promising grace [Measurements]. I’ll confine myself to the soundcloud audio file of Limit which also makes visible the way that ‘silence’ today is ever more relative. Also to the nice youtube vid, just for fun.

My other thought comes in the form of words from Francis Alÿs in an interview with Russell Ferguson from the Phaidon volume on his work [2007]. FA is referring to his chasing of tornadoes -as shown recently at the end of the brilliant retrospective at Tate Modern [brilliance which travels btw; at Wiels, Brussels until Jan 30th, then MOMA, NYC May 8 -August 1. Erm, hesitate?];

“I found in that pursuit the perfect image of fuite en avant, of fleeing forwards” which he links to his filming of mirages, A Story of Deception [2006], too. The mirage he describes as a mechanism, the opposite of the notion of an apparition; “While one approaches it, the mirage eternally escapes across the horizon line, always deceiving or eluding our progress, inevitably preceding our footsteps. It is a phenomenon of constant disappearance, a continuous experience of evasion. Without the movement of the observer, the mirage would be nothing more than an inert stain, an optical vibration in the landscape. It is our progression towards it that triggers its life … What interests me is the intent, the movement towards the mirage. For me, the emphasis is on the act of pursuing itself, in this escape forwards. I see the attempt as the real space of production…”

This is exactly right and chimes with my own thinking and writing about what I used to call a ‘dirty utopianism’; broken down but cobbled together. Indeed, nothing else interests me, either. Seems to me that in such a context, James Blake’s silence is actual, pregnant, potent. Just wish [well, hardly!] it had got to No. 1, although of course its very existence is a refusal of the deadliness of pop cult as it is currently manifest.

As Cage demonstrated over and over, there’s always some small apparently idiotic attempt to make… and in that making something very big continues to happen. The attempt is “the real space of production” and a dirty utopian gesture of unbounded potency in the second decade of the third millennium.

One thought on “on silence or not, cage blake alÿs and on…”