In a guest post (for the Green Party, 6 December 2020), Guy Mannes-Abbott celebrates Tree Week with stories of the Foxglove tree (Paulownia tomentosa), one of many species that make up the Heygate Legacy. He led what became a community campaign to force Southwark Council and developers Lendlease to recognise the public welfare or commons value of the urban forest of 458 trees on the old Heygate Estate at Elephant and Castle.

Early in the first lockdown this year I decided to tweet a Tree of the Day from my @leaftoleaf account; images and notes about a new network of trees that I had an intimate relation with in my neighbourhood. Those trees included Persian ironwood and silk trees, Indian bean and horse-chestnut trees, oaks, hornbeams and field maples, black pines and poplars, and the trusty London plane in estates, streets and parks centring on the Elephant and Castle.

A Foxglove Tree (Paulownia tomentosa) on Weston Street, just outside the Elim Estate, one of thirteen trees -incl 3 HL- threatened by plans to build a new road here and reduce canopy values by two-thirds.

What is the Heygate Legacy? In 2010, Southwark Council signed a secretive agreement to demolish and densify the Heygate Estate at the Elephant and Castle, but overlooked one thing. The agreement with developer-partner Lendlease committed each to ‘enhance existing habitats’, while actually destroying almost five hundred trees across the 23 acre site. Not only did they radically under-estimate the trees’ ‘public welfare’ values – which the Local Authority calculated by (mis)using the CAVAT mechanism – they overlooked the public. We – a group of my newly encountered neighbours; a found community from all around the Elephant- used the same mechanism to establish that the canopy or commons value of the trees was twenty times Southwark Council’s calculation, and demanded that Lendlease do a proper valuation so that every single tree, however humble, would count.

It’s a long story but our strategy worked. They were forced to remove new roads and retail-clad towers mid-site, and so retain Chearsley and Cuddington Copses, clusters of London Planes, as well as a significant run of the Walworth Woods, for example. Those rescued trees distinguish the development and define the green landscaping that is gradually reappearing at Elephant Park. All on-site trees lost will be replaced on a ‘one-for-one-plus’ basis eventually. Far more significantly, the canopy value we established in 2011 was banked and redistributed in the form of a thousand large canopy species trees (on a four-to-one basis, rising to fourteen-to-one with one fabled tree) now consolidating existing canopy and adding biodiverse resilience to an extended hinterland reaching between Kennington Common, Mary Harmsworth Memorial and Southwark Parks, Guys Hospital and Peckham Road.

Another view of the peculiar kinship between the young Foxglove and maturing Indian Bean Tree, both peculiarly productive in these images from November 2020. The developers’ threat is to interconectedness as such.

It took five years for our trees to settle because Southwark Council invented new Highways regulations to make it almost impossible to plant them in the street, as their own planning permission had determined. Lendlease deserve credit for coming round to ‘owning’ the redistributed forest, and persisting with the planting of a wide range of valuable trees: oaks, London planes, field maples, etc., various conifers, productive fruit and nut trees, unusual and very rare urban species. There is a cluster of Catalpa bignonioides (Indian bean trees) in the Kingston Estate off East Street, linking with those in the House of Commons’ courtyard on Parliament Square, and dotting north Southwark in between. A single Celtis australis (nettle tree), one of London’s rarest species, landed in the Nelson Estate off Walworth Road, supplementing an existing one on Henshaw Street off Balfour Street. 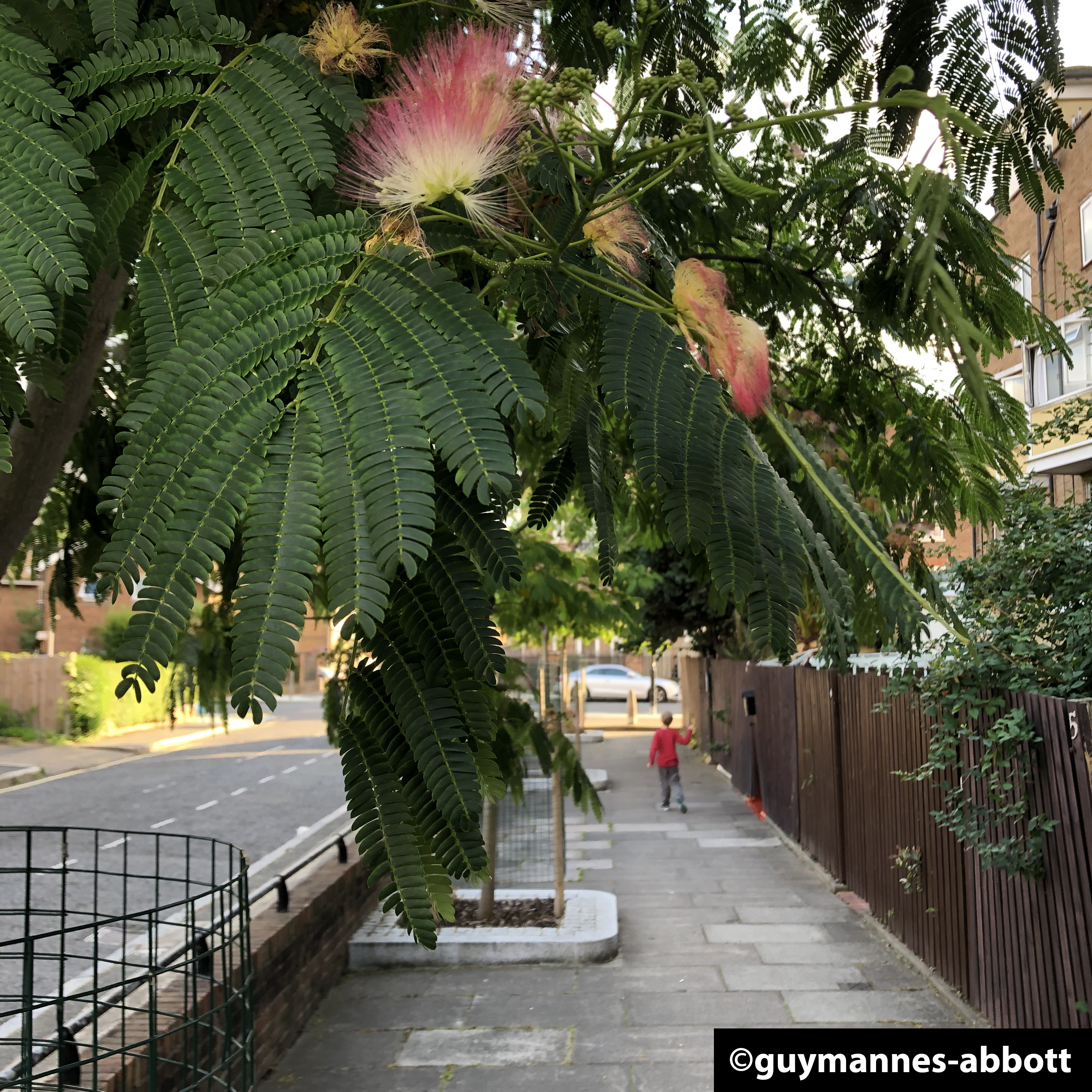 A run of five Persian or Mimosa Silk Trees (Albizia julibrissin) along Tatum Street, distinguished by their spray of pink stamen in the summer, dark brown pods in winter

During lockdown, I found myself running in deliciously quietened streets, joining up these Heygate Legacy dots to post my Tree of the Day. Those mornings threw up species I was not then entirely familiar with, like the Foxglove, Princess or Empress tree. One in Salisbury Row Park startled me with its great purple-horned panicles jutting up and out in the spring. Another planted to beguiling effect in the Carter Street entrance to the Penrose House Estate’s green drew me back often, then one at the top of Law Street with its jumbo scale leaves and gradually emerging big brown pods reminded me of both. Weeks later I cycled past another on Weston Street, just outside the Elim Estate, standing gleefully between a pair of maturing Catalpas, each elegantly crowned and super-productive with long hanging beans. What a sight.

There were other Heygate Legacy sights and stories; a row of Persian Ironwoods along Tabard Street fluctuated from hard greens to brown desperation in mid-summer only to recover their green powers after an unseasonal early autumn, and grace us with gorgeously rich golden reds long into November. I was already fond of Persian silkwoods but grew obsessed with their dainty spray of leaves, stunningly weird floral display of fanning stamen in orange and pink, their lime green pods contrasting with the finesse and gradually turning a golden hue as winter bit, yet the tree remains green late into November too.

The Heygate Legacy represents unimpeachable ecological values but these networked trees also embody the commons value we established. They are a form of radical repair for a casual disaster inflicted by a Local Authority that still shows little understanding of what it got so sickeningly wrong. For example, it has been trying to redeem the massive loss of homes it inflicted on the borough through an ‘ambitious’ New Housing programme. It’s hard to replace thousands of lost homes when more are lost to Right to Buy every year than they can build, something that only they gave no thought to before demolishing so many.

A Persian Ironwood (Parrotia persica) tree in Salisbury Row Park, one of many in the expanded forest

One of these new builds will be on Balfour Street in place of an opportunistic car park on the Salisbury Row Estate. Twenty-six double-aspect council homes delivered without losing green space, the trees we fought for to compensate for the destruction across the Heygate site, or a very rare Chitalpa tashkentensis, a hybrid related to the Indian bean tree. The new block stands back to protect the Heygate Legacy and its embodied public benefits, instead of eating up everything to the red line of the site as is typical in the failed era of Opportunity Areas. Equity is indelible; you can’t restore public housing by destroying these encompassing public welfare values.

Then news came that the Foxglove tree, appreciated from the depths of my soul as well as for reasons above, is threatened with casual destruction by another infill scheme at the Elim Estate, between Long Lane and Weston Street. How could this possibly be? The Heygate Legacy tree was planted as recently as 2017, after infill plans were announced by Leathermarket JMB/CBS (‘Civil Benefit Society’!) and after lengthy wrangling with the Local Authority who conceded its wide pavement location beyond the south face of the Elim Estate lined within by low level garages. How could they not know what they were doing in 2017? Or made the trees they formally approved a clear planning constraint? What of the two magnificent flourishing and quite rare Catalpas?

A Persian Ironwood on Lyon Street in the Swan Mead Estate, one of many HL trees and biodiverse species*

A quick glance at the site beside Weston Street reveals how easily a properly motivated developer or architect (Leathermarket Housing Association and Bell Philips Architects in this case) can adapt physically in the context of a mounting climate crisis and not trash our trees and their commons values so thoughtlessly. On my next visit to the tree, I took tape measures and a savvy architect to verify these facts and to ensure that the trees are not needlessly destroyed again by incompetence and a lack of care; green-washing on the one hand while trashing chances for ongoing life in this peculiarly iterative way on the other.

An unexpected chapter in the story of the distinctive purple tree with massive leaves, date-like pods and nascent buds that resemble chick peas will centre on this renewed battle. It’s vital to ensure that every Heygate Legacy tree is recognised, their affecting story told, and that each is flagged up as inviolable vessels of public welfare before any development process begins. All of us have been discovering that the future is already here. We know that we are in the early stages of this Climate Emergency; a struggle for our lives that requires hard not soft principles, significant change, concerted action, and steely urgency. Time to stop destroying urban trees and eating up green infrastructure for short-term ‘gains’; any trees, any green spaces.

*These images of the Ironwoods were from the summer when they all dried prematurely, but recovered early Autumn in the rains and put up a renewed green and then orange-into-bronze-leafed display into late Winter. They began 2021 early with gorgeous splashes of crimson stamen before, during and even after the frosts en route to budding into new greenery by mid-March. Plans for the Elim Estate are strongly opposed by residents and neighbours in overwhelming numbers, and flout GLA and LA policies for adapting to Climate Emergency. When they were forced to revise their inaccurate tree measurements and under-valuations the developers admitted they would reduce canopy value and related health and ecological benefits by two-thirds and offered a cheque to offset it!