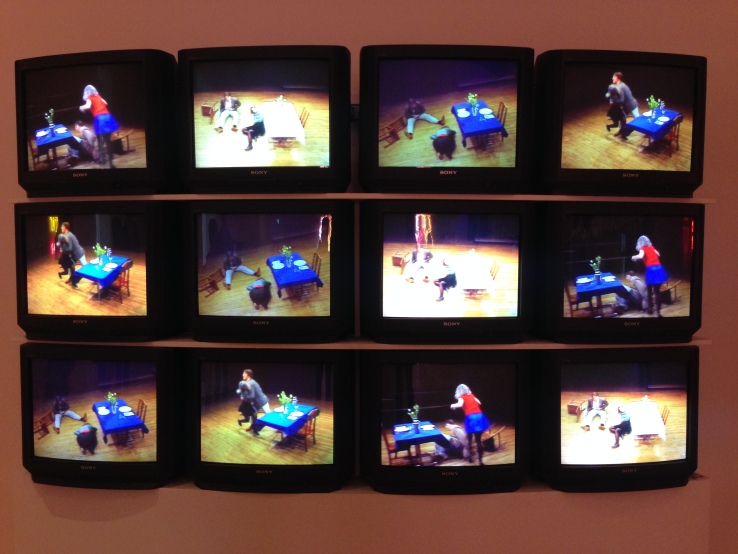 Tate Modern has a Nauman room on the 4th floor of the extension, where Bourgeois was. It may, as with the LB, have the limitation of being only some works from one collection (you-know-who-dissociated-from-what), but I’m glad that one of the (patchy) Greatest Hits in this case is Violent Incident. It’s showing on a wall installation in at least two versions (I was transfixed by ‘my’ version) for months to come, free to see.

I’ve been laughing like a fool at this and other Nauman videos like the one of the laughing clown, for three decades! Back then -and for some years yet- M. and I would ‘perform’ it mainly for our own happy purposes, at the G. or in film studios, no doubt at art dinners here and there too … There was that ICA show, with an on-form D. upstairs, too; 1991. Overlapping with that period, Nauman was also one of the very obvious enablers of what became ‘Brit-Art’, which you know but perhaps not quite the extent or detail of at times?

It’s the laughter that detains me. I don’t think I would find performed comedy of the same vintage funny in the same way today, as in actually genuinely-funny-right-now. I’d like to or would be perfectly happy too (buddha knows!) but time can be cruel with comedy and even if not it quickly pales again. Not with Violent Incident, which I road-tested for you twice in one week by really quite freakish chance…

One difference that time has made of it for me; I am not posting images of the jacketed man’s response to his chair-pulling partner, a thrust too far 😉

Anyway; go baby go … as BN must have neoned some time or other…

NB: TateModern have a good page on Violent Incident here

and on the Room/collection (including images of about half of the works) here.