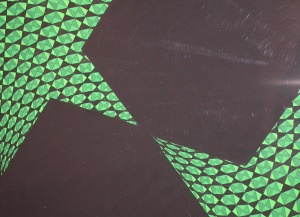 There are two very good reasons for me to return to the work of these exceptionally good artists. Firstly, it is the last week of their exhibition at Corvi-Mora. Secondly, the publication of extremely beautiful artist’s books by Raking Leaves is imminent. Exhibition and publications are best seen together. To do so you’ll have to hurry to the gallery this week [11-6 Tuesday-Saturday], then hold out until the publication date of 30th March.

AK is showing four large new paintings which mark a stylistic development on previous work, showcased in a retrospective at the surprisingly capacious Pumphouse Gallery in 2008. IQ is showing six small paintings from his Moderate Enlightenment series; complex portraits of his wife, self, gallerist and studio assistant. In truth it’s a frustratingly small selection, given that both artists deserve the attention that a gallery like the Serpentine can give their work individually. I’m counting the days until it catches up, but quietly dreading some kind of ‘Pakistani Byway’ confection instead.

AK’s new works render beautiful abysses into which swirl complexly patterned stars and squares of gold leaf. There is an all-consuming joy and abysmal dread in them, they are cosmological and catastrophic, thresholds and black holes. Her work has previously excelled with ambiguities of perceptual, personal and architectural space, explored realms of looking and being seen -with all the import both contain in our world of phenomenal/ogical ignorance- and return again and again to the [illustrated] book, often literally with exquisitely rendered lined pages from school books.

Along with a kind of undeclared Islamic minimalism in the work is a politics that has grown ever sharper. From problematising notions of the gaze, in which veiled women become what you want to see, her work has reached a stage where the pretty decorative ‘holes’ created in and by patterned, pulled together edges of fabrics, resemble bloody wounds in bodies with all-too real War on Terror referents. See the work made for the Queen’s Palace in the Bagh-e Babur, Kabul last year here and here.

These newest works are called Pattern to Follow and embody a distinct break. It is as if she can’t bear to look any more, has turned her eyes pleadingly towards an infinite universe or the embrace of god, her hands to the making of open questions. What has previously been indirect has turned full circle so that her most abstract even decorative works, I can’t help feeling, are most revealing of their actual context [WoT’s totalised global violence]. Elegant, visually compelling, geometrically abstract, non-declamatory, yet invested with passionate appeals to some form of justice beyond reach.

IQ’s works are from the ongoing series Moderate Enlightenment. Here he locates western representational portraits within familiarly patterned floral landscapes or more abstract spaces. Some of these highly refined images are then framed within a series of lined boxes which reframe and link with abstract shapes floating like blind spots from the sun to left or right.

These six make an unlikely introduction to his work and are not the strongest argument for its profound innovations. However, they are fascinating to linger with and contain many of the visual and other elements that characterise his wider work. There are hip young things standing in classical landscapes; one male figure stands at an uncomfortable angle to the viewer, casting an unusual shadow on the foreshortened wall behind him.

IQ’s self portrait is a head in profile within a tilting oval, surrounded by a wide mount of gold leaf. The head is naturalistic but doesn’t actually resemble the better looking artist. Every hair on his head seems to have been rendered with the miniaturists famously fine brushes and the flies swarming before him evoke the heated atmosphere in which the work was made. IQ’s trademark leaf-bouquets [reappropriated from Kangra paintings and made to symbolise love] loom beside his wife and gallerist -the latter’s woollen jumper displaying furry licks.

These paintings of IQ’s contain love ‘poems’, perhaps ghazals but in any case they represent a relatively benign world compared to his wife AK’s evident [though still always open, ambiguous, ambivalent] concern or anyway, the seriousness of her new work. There is a curious dialogue going on here and I like the workshop feel of them showing together, something explored to its limits with an earlier project called Kharkhana [a very fine catalogue is available here]. However, there’s no sense in which either ‘needs’ the other and as an exhibition it would compliment the work of both to show more work separately.