I am running in Ramallah and it is in audio in the current issue of Manifesta Journal #14 which you can read online here, download the complete pdf here, or go straight to the Translated By pages here. Scroll down to where it says ‘You pick a random number’ and 3, etc., and listen to the audio of my excerpt. All this running makes it a bit less painful -and In Ramallah, Running proper will be here soon!

Do have a look at MJ14 edited by Rasha Salti et al and with some great sections; conversation with Naeem Mohaimen, and  one on Joana Hadjithomas and Khalil Joreige’s Lebanese Rocket Society, the main monument of which stands today in a public square in downtown Sharjah -a SAF commission from 2010’s Biennial. Manifesta as such kicks off in Genk, Belgium this year of course; end of May slash start of June. Be there! 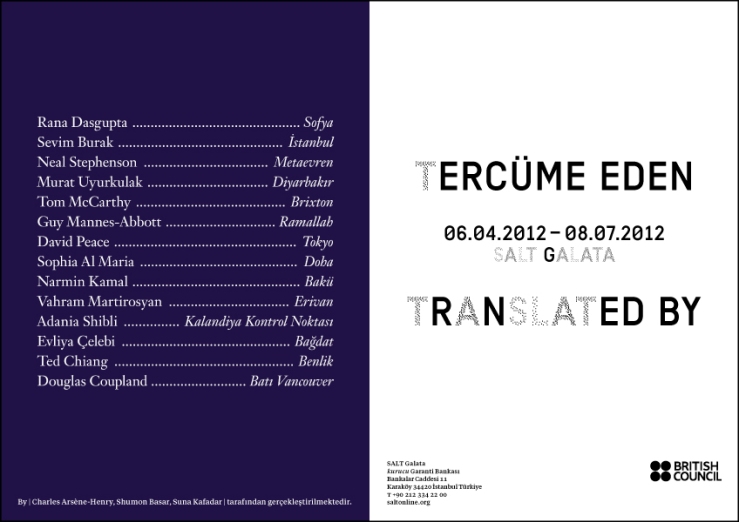 Translated By in a new configuration and new location. I’ve not made it yet but hope I might. There is also a new version of the book, edited by Shumon, Charles and Suna Kafadar and designed by Zak. I’ve not seen it yet, etc.!

Meanwhile, In Ramallah, Running has been painful too, but advances are promised by the publisher very soon now and I will of course share confirmed publication and other dates when I have them. Meanwhile, very good bound proofs are available for review and related purposes. Contacts are here in the pdf button at the top. Be in touch!

Translated By, Shumon and Charles’ exhibition of audio recordings of writing about place by a range of writers including myself, with a short excerpt from In Ramallah, Running  in the form of cut-together running texts, is currently on show at CCA KITAKYUSHU Ogura Gallery December 12, 2011 – January 20, 2012. END_OF_DOCUMENT_TOKEN_TO_BE_REPLACED 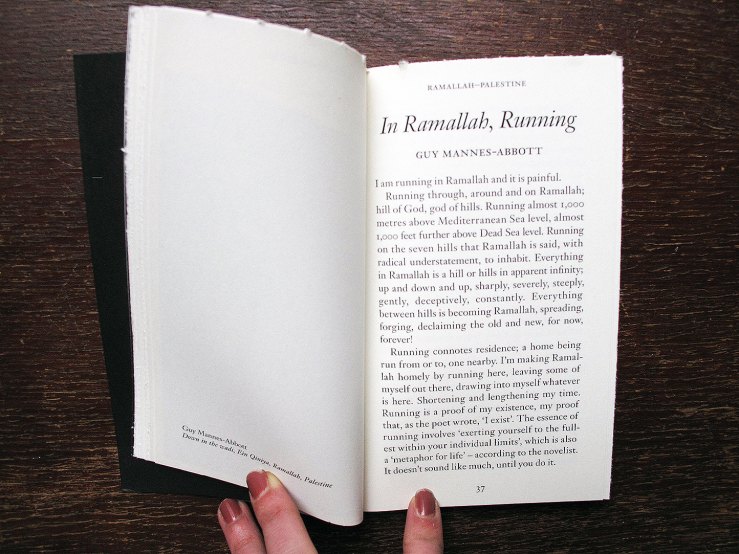 In Ramallah, Running by Guy Mannes-Abbott [2011]

I can’t resist posting this image from one of the distributor’s sites for Translated By, there’s a page of other images/details here.

This is a tiny excerpt of the excerpt obviously. As a whole, my short running texts within Ramallah itself alternate with longer walking essays at/in/beyond the limits all around, which multiply and abstract in ways peculiar to this unique Occupation. Hence my attempt to reconjure the actual place, and actual people in their place. The whole text begins as it appears to do here, though this excerpt of 1500 words is made up only of running texts.

The actual book –In Ramallah, Running- is coming together in all its ambitious complexity!  END_OF_DOCUMENT_TOKEN_TO_BE_REPLACED

*NB [UPDATE] The accompanying book will be published February 10th, details here and below; END_OF_DOCUMENT_TOKEN_TO_BE_REPLACED

You’ve entered the room. It looks empty, silent. Vinyl text on the wall, like an album track-listing. Writers’ names instead of bands.
You’ve been given a black pamphlet and an electronic device connected to a pair of headphones.
You’ll put them on. Pick a number. Press play. You look for the same number on the walls. You find it. Next to it, an image. Beside there is a seat. You sit. On a beat up office chair dredged from a river. You listen. And you start travelling. You’re on Atlantic Avenue, between Nevins and Third. It’s Brooklyn. 1971.
The voice stops. You go for another track, another chair, a different place. Now on a little stool, you follow a six-year-old girl’s voice in your ears. You’re lost in the Sheraton Hotel. An Aztec spaceship in Doha’s desert.
It will last for 11 tracks. Through Tripoli, Brixton, Ramallah. Sofia, The Metaverse. Ardennes forest. A garden.
Until West Vancouver. Where the world is ending.

NB I have a text, a small excerpt from In Ramallah, Running 2010, in this show and publication in happy company… details to follow.

I’ll also update during January 2011 with news on the book itself as it progresses towards publication which is now scheduled for October 2011.