I don’t like survey shows -especially of the squeeze a culture or a continent into one building in London type- but The Empire Strikes Back at the Saatchi Gallery is a must-see. It’s an elegantly curated glimpse of subcontinental art weighted, of course, towards Big Statement and Painting -most of the latter of which could date from any of the last five decades.

Of the bigger names here -Subodh Gupta, Bharti Kher, Jitish Kallat, Rashid Rana- I’m happiest to see Atul Dodiya’s scandalously neglected work in London and now hope for a dedicated exhibition of it. The ‘blame’ for such seasoned indifference and the real limitations on this particular show are contextual; British incuriosity about the actuality of India [and beyond] despite its renewed global status.

Admission to Saatchi’s ’empire’ is free; no complaints, no excuses!

Yamini Nayar: What is Essential

I’d not come across Yamini Nayar or her work before. Born in Detroit, resident in New York, claimed by art criticism as one of the upcoming stars of new Indian art, her work  explores ambiguities of exactly this kind. Saatchi is showing 4 photographs dating from 2006-08; table-top constructions of mostly interior spaces, assembled from scraps/found objects before being photographed and discarded. Her own website [which includes her Studies; potential buildings rendered in lines drawn on photos of derelict sites] is here, and her gallery is here. 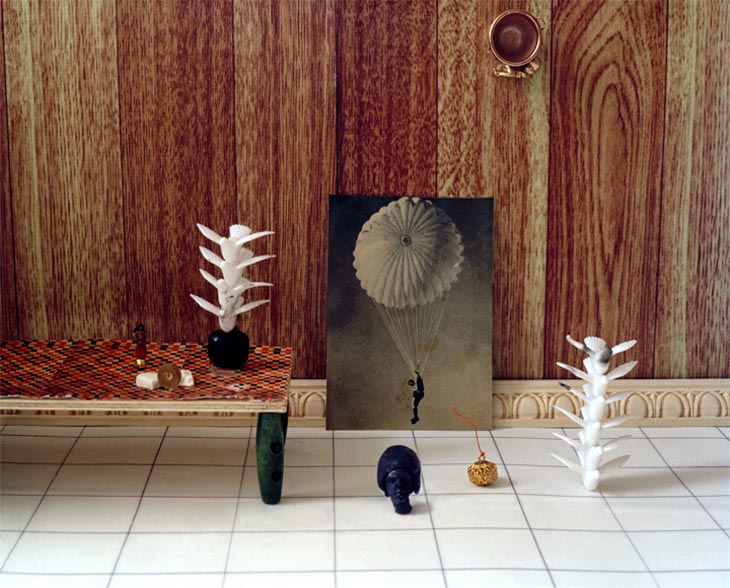 One way of entering this image is through David Lynch and the uncanny, but why use the back door? These highly ambiguous spaces are more potent with now: the world as it is and might be. What is Essential is surprisingly but appropriately small in actuality. It’s also one of the most close-up and two-dimensional of her constructions and thereby unrepresentative, but it contains all that intrigues me in her work.

At first glance What is Essential is a room, oddly but recognisably decorated. It could be anywhere but then again it must have been approached via the subcontinent; the simultaneity of four textures, the unlikeliness of those bird sculptures, the glittering objects on floor, table and wall. At the same time it’s an image about the u-topic quality of space in 2010; everywhere and nowhere, spontaneously generated as place, a kind of archival utopian vision.

But it is the coppery ‘gold’ button with its ambitious thread that engages me, granting the possibility that the parachutist might be on his way up rather than falling, captured in flight like the birds. This element is more typical of her other work too; the use of objects with ambiguous scale, or of objects as synonym or metaphor, stand ins for other things which are also approximate. The catalogue describes these objects as ready mades, which is reasonable, but then their readymadeness requires specific referents or context. What is their context?

In this model of a suggestively real interior, the button -if that’s what it ‘is’- is an open signifier. Nayar’s art is located here; the other photographs in the show and beyond build from this and this is why they are so potently suggestive. Suggestive of architectural, cinematic, religious, domestic, crime scene, student bedroom, sufi retreat, miniature painting, spooky/site-specific art installation as well as many equally improvised rooms that I’ve stood in in big cities, mountainsides or on desert fringes in the subcontinent itself.

I want to insist that these are not stills or single frames but movies, dense poems, potent visions, proper ‘utopias’ for our age; broken down but also cobbled together, existing, even if only in this moment now. The task is to extend the moment and build in it…