A previous post on Mohamedi referred to my catalogue text from 2001. Now I’m posting my short review of her recent retrospective exhibition as it appeared in the UK. I was pleased and proud to write something on a show that went almost unnoticed -and was certainly not engaged with- in the UK [again], but there’s much more to be written about her work and its contexts.

For now, here are scans of the pages in Bidoun [below; click to enlarge]. Let me repeat that it’s essential wherever you are in the world to see the work itself -to stand in front of the drawings in particular- whenever the opportunity arises. Until you do you will have missed an important 20th Century artist and maker of our new world.

I’ll return to Nasreen Mohamedi at greater, speculative and more definitive length in the future…

END_OF_DOCUMENT_TOKEN_TO_BE_REPLACED

Nasreen’s Notes – Reflections on Indian Modernism [Pt 1] has now settled at the Kunsthalle Basel until the 5th of April.

More on the show is here. More on Nasreen Mohamedi is in an earlier post here and the current issue of Bidoun. Catch her work live if you possibly can.

The Estate of Nasreen Mohamedi is represented by Talwar Gallery NY here.

Where next? What next!

This image is one of several in the show, in which she has reframed high contrast photographs of the street, backyard and classroom furniture at Baroda where she taught. No direct link to her drawing, plenty of indirection…

In September the fullest retrospective (Jan19link) so far of the work of the late Nasreen Mohamedi arrived at Milton Keynes Gallery. Nine years earlier, the curators of this travelling show, Grant Watson and Suman Gopinath, had asked me to write a catalogue essay for their ‘Drawing Space Contemporary Indian Drawing‘ (Jan19link)  in London -which also featured Sheela Gowda and NS Harsha.

In 2000 NM’s work was almost unknown outside India and closely treasured within. It mesmerised me and became another of the endless roads that drew me to Gujarat. There I met her friends, as well as colleagues from Baroda’s Fine Art School where she taught for many years, most memorably the brilliant and beautiful Bhupen Khakhar who died in 2003. Before his death our friendship was sealed by witnessing the state-sponsored pogroms of 2002 [in which Muslims were burnt out and slaughtered across the state of Gujarat] trapped together in his car between burning road blocks and the main road where armed police gave cover to a well-organised ‘mob’.

MKG drew together two sets of drawings [from her family and the Glenbarra Museum, Japan], the broadest range of photographs yet shown, some diary pages, early collages and several vitrines of memorabilia and working materials. One of these contained photographs of her with family and friends, some of which were taken at Bhupen’s studio-home. One shows her with another artist-friend, Krishen Khanna, long the owner of my great grandfather’s colonial bungala in Simla, where his studio is ‘cut’ in to the mountainside.

NM’s reputation has continued to grow since 2000, especially after she was ‘discovered’ at Documenta 12 in 2007! I expected MKG’s comprehensive exhibition to trigger proper recognition as well as consolidate her art historical place. While the latter is an ongoing process, it was disappointing to see that she remains just a little bit too much to take on board for incurious British minds yet. 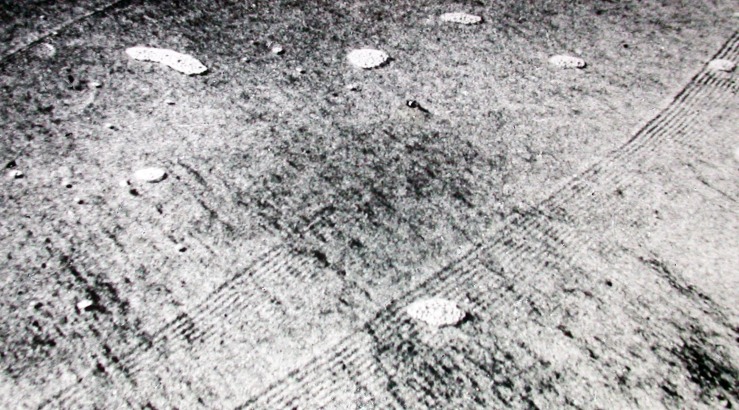 However I was happy to be asked by Bidoun to review the exhibition and although it’s only a short piece, no less delighted to see it in the current issue Noise [Winter 09/10] which you can rush out and buy! I’ll post it here eventually but meanwhile here are some other links;

The Drawing Space catalogue remains the best introduction to NM, reproduces some drawings, extracts from her uniquely worked diaries -including a reproduction- and a photograph of her minimal studio. Copies of the elegant little book [which is as good on Gowda and Harsha] are still available for £7 at inIVA here, or Cornerhouse here.

Norway’s OCA originated a smaller version of ‘NM: Notes – Reflections on Indian Modernism [Pt 1]’. Their site has a page linking to a pdf [8.51mb] of a booklet with some reproductions and a text by Grant Watson. A version of Grant’s text is also in Afterall magazine’s Summer 09 Issue, No. 21 here. That issue of Afterall contains the best reproductions of NM’s notoriously difficult to reproduce work currently available.

In NY The Drawing Center produced a good publication for their ‘Lines among lines‘ show in 2005, including Geeta Kapur’s revised essay on her friend, which I once thought eulogistic but now find increasingly resonant. Talwar Gallery in NY has an artist’s page of drawings and the photographic ‘sketches’ which she never intended to show but which are fascinating.