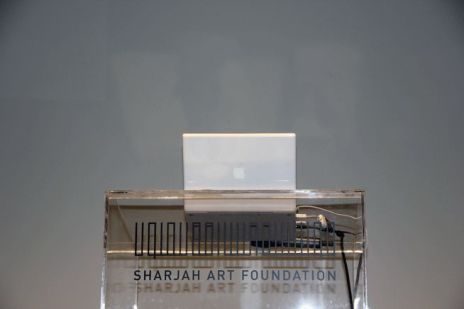 I like a barb like that and it makes a point, excepting that we are in Sharjah where the simultaneous translation is excellent and I’d anticipated relying on it myself in 2012. A cusp, especially on a global scale, is always hard to identify [!] but I would suggest this might be an anxiety from before the cusp that, it seems to me, we all occupy. Not easily, not fully, not formally but actually… END_OF_DOCUMENT_TOKEN_TO_BE_REPLACED

I’ll be speaking at the March Meeting, on a great panel [here] during 3 days of high calibre contributions/discussions [here]. I’ll be talking about writerly life on the ‘frontier’, using e.things -including IR,R’s crossing of disciplines/limits- not as models but as exemplary productions on the frontier.

I’ll also be writing about the MM and associated events as a further extension of Notes from a Fruitstore. Things change and -as an artist friend said to me while badly letting me down in public- shit happens. Although I have regrets about last year’s events, I welcome SAF’s new direction too [under Yuko Hasegawa here], towards the east [with clear implications] from its location close to the Indian Ocean.

There is a great archive of March Meetings [here] from which I quote Jack Persekian, not to be clever or contentious but because his words describe why I’m going to be part of the coming week in Sharjah [which compliments other rich programmes in Doha and Dubai here];

‘The March Meeting is a serious attempt to engineer strategies of discussion, networking and collaboration on topics of mutual concern and future possibilities… Our objective is to establish Sharjah as a permanent address for an annual gathering of artists, curators, institutions, writers, producers and art practitioners from around the world.’

I know how discerning those of you that find your way to the Fruit Store are; please consider the strange disaster of this carefully [it’s a shame, now, if you never made it to Sharjah, and especially if you didn’t make it to the substantive triumph that this year’s 10th Biennial represented] and do the right thing; END_OF_DOCUMENT_TOKEN_TO_BE_REPLACED