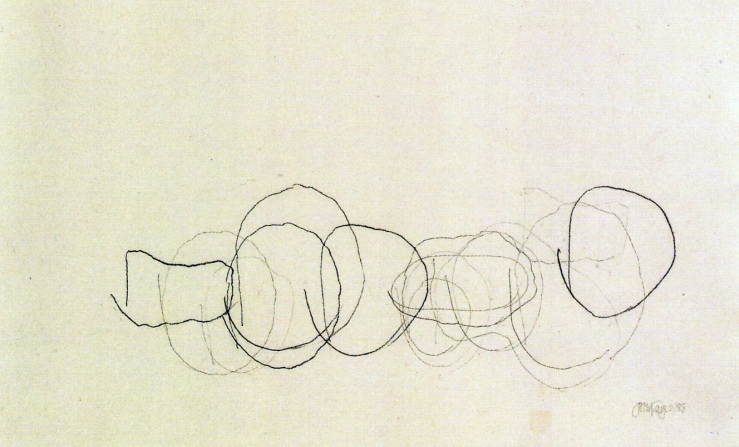 This complete show of John Cage’s paintings and drawings is one that you need to go see, be with in real time and place. It’s not only that it doesn’t reproduce well [despite there being a very good catalogue with excellent reproductions newly photographed in it here updated link 2020] or that I’ve badly scanned one of my favourite delicate drawings done -in place of meditation- with more than one pencil around stones that were special to Cage [the allusion is to the famous dry stone garden at Ryoan-ji, Kyoto] but that until you’ve journeyed to stand before them, share their space you haven’t actually seen them.

I loved this exhibition of works for their affective simplicity -openness, lack of guile- and transforming leap from the disciplined procedures that generated them to their qualities as visual art. END_OF_DOCUMENT_TOKEN_TO_BE_REPLACED

Future Movements Jerusalem at Liverpool Biennial [18 Sept-28 Nov 2010] is an essential exhibition of work from and about Palestine. I posted on Raouf Haj Yihya’s Meter Square here, the New Statesman bravely ran a rather muted piece here and my own review will run at Babelmed shortly. Surprise yourself if you can get to it, or wait for it to travel south as I know it is scheduled to do. But be sure to see it.

Otherwise, Liverpool is a far better Biennial than scarce notice of it by lazy old journos suggests; everyone rightly notes the almost painfully compelling acid-Warhol-mashup-vids of Ryan Trecartin’s but there’s much else, including NS Harsha’s very nice installation [right] at 52 Renshaw Street and not least at Tate Liverpool -where a dubiously conceived but actually nicely put together show called The Sculpture of Language by Carol Anne Duffy exhibits some great and rarely aired works.

Dirk Stewen at Maureen Paley [08 October — 14 November 2010] is the most winning new work in town for me. If you do make it to the frieze jamboree then add this show to your bottom-line schedule otherwise you’ll have failed yourself and London. If you’re not friezing it then take advantage and spend some time in a show spread over two floors, beautifully arranged/hung works combining utopian gesture with extraordinary concentration, tentativeness and beauty. The work seems hardly there at all and yet surprises/delights with a precision that makes for indelibility. It’s Stewen’s first show in London, I’d never seen the work before and this exhibition made me happy to be alive; don’t miss it! END_OF_DOCUMENT_TOKEN_TO_BE_REPLACED